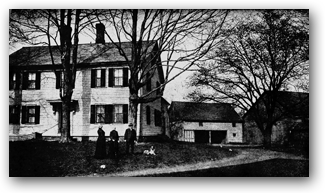 Meg Corey finds herself out of a job, dumped by her boyfriend, and without a home when the lease on her Boston apartment runs out. Her mother tells her it's a great time to fix up the old house in western Massachusetts that she hasn't seen in decades, so she can finally sell it. Since Meg has no better ideas, she moves into the old house, in the middle of winter. Then her plumbing fails—because somebody stuffed the body of her ex into her septic tank. Of course she's the obvious suspect, so she has to figure out who actually did it.

Not a promising start to a new life in rural Granford, but Meg not only decides to stay but learns to manage the apple orchard on the property. Of course, neighbor Seth Chapin may have something to do with that. But why does she keep finding bodies?

"Delightful... [A] fascinating whodunit filled with surprises."
—The Mystery Gazette

"Sheila Connolly's Orchard Mysteries are some of the most satisfying cozy mysteries I've ever read... Warm and entertaining from the first paragraph to the last."
—Lesa's Book Critiques

"Connolly's cozy has sympathetic characters, who are not stereotypes, nice details about life in a small town and information about a heritage orchard—all of which make this a warm, very satisfying read."
—RT Reviews 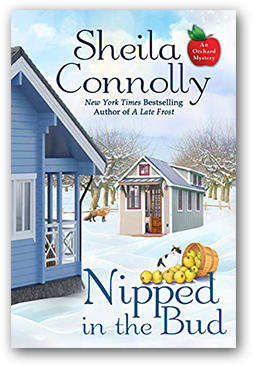 Nipped in the Bud

The New York Times bestselling author of A Late Frost returns with orchard owner Meg Chapin trying to stem the tide of crime...

Winter still has a firm stranglehold on the small town of Granford, and newly married orchard owner Meg Chapin is restless to begin her spring pruning and planting, while Seth busies himself with a new project of his own. But their relative peace is shattered when a gunshot breaks the winter silence and they discover the body of a dead woman on their land. What's just as troubling is that the state police have hushed up the murder and are warning Meg not to investigate.

Never one to sit by idly with a killer on the loose, Meg starts digging for clues and probing for answers as discreetly as she can. When the victim turns out to have been an undercover reporter doing a story on the blossoming trade in illegal drugs in the area, Meg's stunned to learn that this very modern crime has come to sleepy Granford. Unwilling to accept that the nasty business has put down roots so close to home—and led to a murder that occurred literally in her own backyard—Meg is determined to nip it in the bud before the town she knows and loves turns rotten... 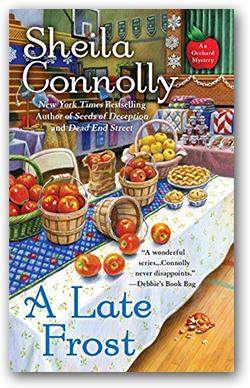 The usually quiet town of Granford, Massachusetts, is even drowsier during the colder months. But this year it's in for a jolt when Monica Whitman moves into town. She's a dynamo who wants to make friends fast in her new home, and she throws herself into community activities. Meg Corey, now Chapin after her marriage to Seth Chapin, is intrigued by the new arrival, who has already sold the town board on a new, fun way to bring in visitors during the off-season: WinterFare, which will feature local foods (such as Meg's apples) and crafts, as well as entertainment.

Tragically, Monica falls ill and dies after the event in what looks like a case of food poisoning. When all the food served at WinterFare has been tested, including Meg's apples, it becomes clear that there's a more sinister explanation to the older woman's sudden demise.

Meg's investigation uncovers a bushel of potential suspects, one of whom is rotten to the core. 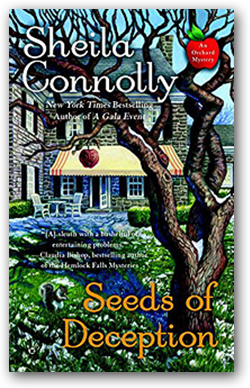 With the bushels of time they spent organizing their wedding, Meg and Seth didn't have a chance to plan a honeymoon. But now that winter has arrived, there's not much to do at the orchard. So with their shared love of history and all things apple, they pick Thomas Jefferson's orchards at Monticello as the perfect getaway.

While they enjoy the beautiful sights, there's a rotten addition to the agenda when Meg's parents discover their handyman dead in the backyard. With a bitter police chief eyeing Meg's father as a suspect, Meg and Seth have to cut their honeymoon short to find the root of the problem. 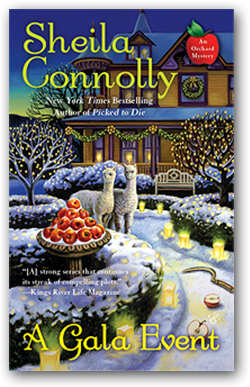 The fall harvest may be just about over, but orchard owner Meg Corey is busier than ever planning her wedding to Seth Chapin. Who knew picking apples would be less work than picking out rings and a dress? And even though the happy couple has invited most of Granford, Massachusetts, to the ceremony, they might have to make room for one more guest...

Ex-con Aaron Eastman has unexpectedly reappeared in his hometown, searching for answers to the tragic fire in his family's past that put him behind bars twenty-five years ago. Moved by his sincerity, Meg vows to do everything she can to help him solve the cold case. As she cobbles together the clues, it becomes increasingly clear that Aaron may have been considered the bad seed of the family, but someone else was one bad apple... 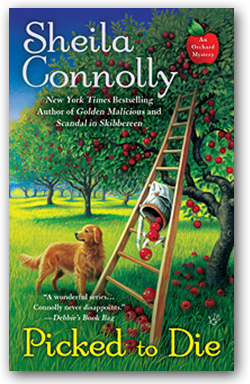 It's harvest time in Granford, Massachusetts, and orchard owner Meg Corey and her fiancé Seth are both racing to beat the New England winter. Meg is bringing in her apple crop with a team of workers, while Seth is working to restore an old building in the center of town. But when his project is set back due to the unexpected discovery of a skeleton under the building—and even worse, a relative of one of Meg's apple pickers is found stabbed to death behind the local feed store—the couple's carefully laid plans are quickly spoiled....

Meg can't help but wonder: are they just unlucky, or is there something rotten in Granford? If so, she knows she's got to seek out the bad apple before it ruins the whole bunch... 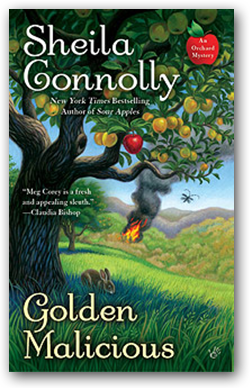 While orchard owner Meg Corey dreads the labor of manual irrigation to stave off a drought, her boyfriend, Seth, couldn't be more excited about doing historic renovation on one of Granford's oldest houses. Tagging along as he picks up supplies is supposed to give Meg a much-needed break, but the trip turns rotten when she almost trips over a dead body at an old saw mill's forest reserve.

But the body isn't the only frightening discovery she makes. A mysterious insect infestation seems to have migrated to the area—one that could bring serious harm to local woodlands. And it's up to Meg to find out what's behind this sudden swarm of trouble. 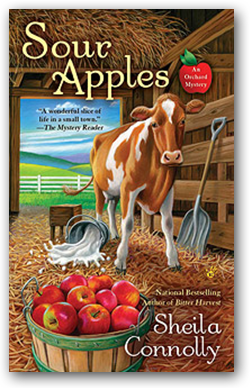 Apple orchard owner Meg Corey is finally feeling settled into her new life in Granford—she's made friends, and her relationship with Seth Chapin is heating up—when her old Boston coworker Lauren Converse comes barreling into town, running the Congressional campaign for a former hometown football hero. But Meg doesn't have time to worry about why Seth seems reluctant to back Lauren's campaign when her neighbor, local dairy farmer Joyce Truesdell, is found dead from an apparent kick to the head from one of her cows.

When an autopsy shows that the fatal blow actually came from a weapon, Meg is even more troubled. Popular opinion points to Joyce's husband as the culprit, but Meg can't help wondering if someone wanted the outspoken dairy farmer out of the way... but why? She'll have to find out who had a beef with the victim, before she's the next one to get creamed... 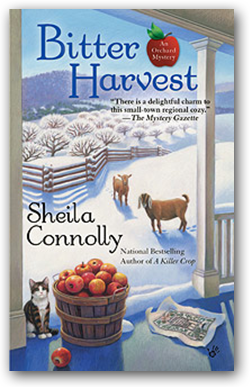 Now that Meg Corey's first apple crop has been harvested and sold, she's enjoying some free time. Especially since she's snowed in without power or heat. Luckily, her maybe-boyfriend Seth Chapin is keeping her company, and has agreed to help her clean out her house.

In a dusty corner Meg finds an early 19th-century silk sampler embroidered with apple trees, but she doesn't recognize the names on it as any of the earlier owners of her house. Then she starts being plagued by a series of small but annoying mishaps. Meg doesn't want to appear paranoid, but when she finds herself locked in the unheated barn overnight, and Seth's van window is shot out in her driveway, she can't ignore the problem any longer. And if she doesn't figure out how the sampler she found is connected to the motive of her modern-day tormentor, her first harvest could be her last.... 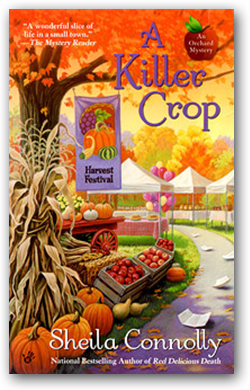 When Meg Corey's mother arrives unannounced in Granford, Massachusetts, Meg's sure it's not just to pay a surprise visit to the apple of her eye. The timing is terrible—it's harvest season and Meg is understaffed in the orchard. Plus Elizabeth Corey is clearly hiding the real purpose of her trip from her daughter.

After an English professor from Amherst—and an old friend of her mother—is found dead on the floor of a cider house, Elizabeth is interrogated by the police, and then grilled by her daughter. She is indeed keeping a secret—but could Meg's own mother really have committed murder? One thing is clear: someone decided to teach the prof a lesson. And the key to unlocking the mystery may lie with a poet who could not stop for Death... 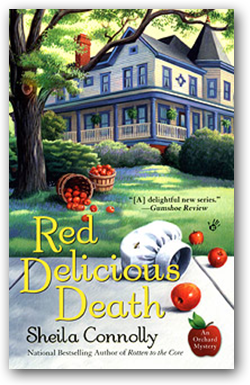 Granford newcomer Meg Corey has more than enough to do, between restoring the colonial house she's inherited and trying to manage her orchard. Then a trio of young chefs fresh out of cooking school arrive in town to open a restaurant using local foods, and Meg volunteers to help them out.

But then one of the chefs is found dead in a farmer's pig wallow. When Meg begins looking into the death, her investigation digs up some old town secrets—and Meg soon realizes that they have a locally grown killer on their hands. 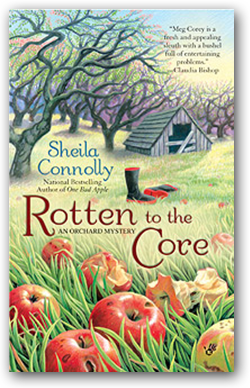 Rotten to the Core

Spring has come to Meg Corey's apple orchard—and it's quickly becoming a killer season. Just as she's getting the hang of managing the two-hundred-year-old orchard she's inherited, the dead body of a local organic farming activist is found in her springhouse. And the only thing that's sprung is a murder accusation—against her...

The young man's body was found with traces of pesticide poisoning. Strange for someone opposed to all things chemical. And why did someone plant his body on Meg's land—when Meg hadn't even met him? Now Meg needs to pick her actions wisely and get rid of the seed of suspicion that's been planted before the orchard—and her future—is spoiled for good. 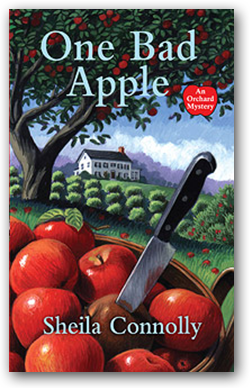 When Boston investment banker Meg Corey moves to Granford, Massachusetts, things don't go exactly smoothly. She has left behind a Boston job that was swallowed up in a bank merger, and ex boyfriend Chandler Hale, in exchange for a crumbling colonial house and an orchard. She figures she'll spend a little time fixing up the house to sell while she looks for a new job and licks her wounds. Things take a turn for the worse when Chandler shows up in town to manage a proposed commercial development project, but Meg can handle that. But then Chandler is found dead by next-door neighbor, plumber Seth Chapin, in her septic tank, and Meg is the sheriff's favorite suspect. With Seth's help she identifies the killer, but by then she has discovered that she doesn't want to leave Granford and her orchard.