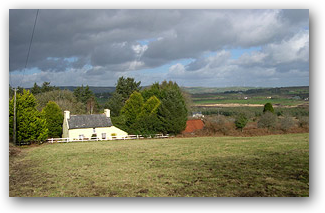 Maura Donovan's grandmother asked only one thing: that Maura travel to Ireland to tell the friends she'd left behind that she was gone. Since there's nothing and no one to keep Maura in South Boston, she heads for the tiny village in West Cork that her grandmother had left decades before. There Maura finds far more than she bargained for: relatives she never knew she had, a home, a job, and friends to help her figure out how to forge a new life for herself in a corner of Ireland.

"Plenty of puzzles with a strong feeling for life in small-town Ireland."
—Kirkus Reviews

"Another winner of a series...Connolly's latest is a captivating tale—sweet, nostalgic, and full of Irish charm, but also tightly plotted and full of twists, turns, and shocking reveals."
—The Maine Suspect 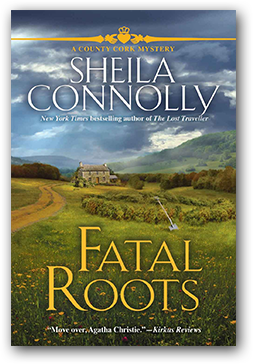 Some secrets are too big to stay buried...

A few months ago, Boston expat Maura Donovan was rekindled with her mother after more than twenty years of absence. Since then, Maura has been getting accustomed to Irish living, complete with an inherited house and a pub named Sullivan's. But now, her mother has returned—and she's brought Maura's half-sister in tow. To make matters more confusing, a handful of Cork University students are knocking on Maura's door asking about a mystical fairy fort that happens to be located on Maura's piece of land.

The lore indicates that messing with the fort can cause bad luck, and most everyone is telling Maura not to get too involved for fear of its powers, but Maura is curious about her own land, and she definitely doesn't buy into the superstition. Then one of the students disappears after a day of scoping out the fort on Maura's property.

Maura treads carefully, asking the folks around town who might have an idea, but no one wants anything to do with these forts. She has to take matters into her own hand—it's her land, after all. But when she uncovers a decades-old corpse buried in the center of the fort, nothing is for certain. 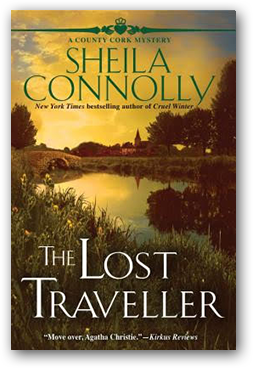 "This seventh in Anthony and Agatha Award nominee Connolly's 'County Cork Mystery' series (after Many a Twist) is a thoughtfully executed and charmingly talkative cozy. The Irish setting is authentic, Maura is a delight, and the characters are gaining depth as this series matures."
—Library Journal starred review

Danger comes to Cork in the seventh County Cork mystery from New York Times bestselling author Sheila Connolly, and it's up to Maura Donovan to find a way to protect all she's worked for.

Pub owner Maura Donovan is settling into a charmed life in Ireland—until a mutilated body on her property ends her lucky streak.

Boston expat Maura Donovan came to Ireland to honor her grandmother's last wish, but she never expected to stay in provincial County Cork—much less to inherit a house and a pub, Sullivan's, in the small village of Leap. After a year-long struggle to stay in the black, Sullivan's is finally thriving, and Maura has even brought back traditional Irish music to the pub. With a crop of new friends and a budding relationship with handsome Mick Nolan, Maura's life seems rosier than ever—but even in Ireland, you can't always trust your luck.

It begins with Maura's discovery of a body in the ravine behind the pub. And then, the Irish gardai reveal that the victim's face has been battered beyond recognition. Who is the faceless victim? Who wanted him dead? And why was his body dumped in the backyard of Sullivan's Pub? Even after the dead man is finally given a name, nobody admits to knowing him. In the tight-knit world of Leap, no one is talking—and now it's up to Maura to uncover the dark secrets that lurk beneath the seemingly quiet town. 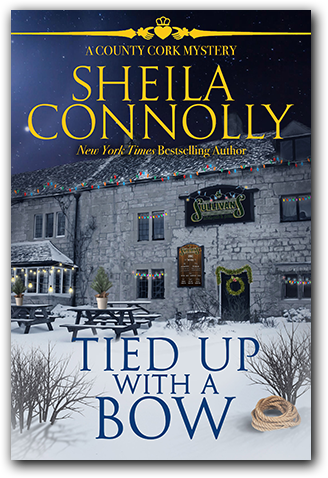 Tied Up with a Bow

Pub owner Maura Donovan is still learning the local customs of the Irish village she now calls home, and with the holidays approaching she's unsure how much, or how little, to decorate. She's also puzzled by the small construction project going on across the street, which is shrouded in secrecy and has the whole of County Cork guessing what it might be. But most troubling of all is the secretive young boy who shows up at the pub's door, hinting that he and his mother had to leave Dublin—in a hurry.

Sensing danger, Maura becomes more alarmed when an unknown man shows up and begins lurking around the pub. With so many questions on her mind and so few answers, Maura knows she'll have to turn to her new village friends to help her sort out all the mysterious goings-on—and maybe deliver an unexpected gift to someone in need. 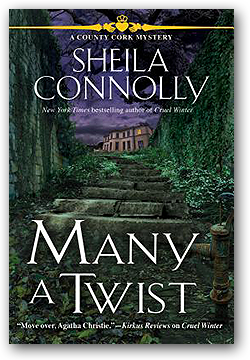 Pub owner Maura Donovan hasn't seen her mother for over twenty years, so when she suddenly shows up in Maura's pub, Maura's not sure what to expect. Her mother is trying to find a life for herself back home and has taken up a position working with the new owners of the Crann Mor hotel just outside Skibbereen. Until her new boss is found dead in the gardens, dumped down the hillside behind the hotel.

Now, trying to rekindle the relationship they've lost, Maura must investigate in order to clear her mother's name. It's not so easy though, as long-time residents of County Cork, including the families of her employee Mick, and the family of the deceased hotel owner, have bottled deep dark family secrets not meant to be uncorked. And someone will kill to keep them that way. 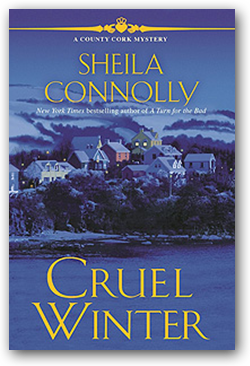 Snow is a rarity in Maura Donovan's small village in County Cork, Ireland, so she wasn't sure what to expect when a major snowstorm rolled in around Sullivan's pub. But now she's stranded in a bar full of patrons—and a suspected killer in a long-ago murder.

Maura's been in Ireland less than a year and hasn't heard about the decades-old unsolved crime that took place nearby, let alone the infamous suspect, Diane Caldwell. But the locals have, and they're not happy to be trapped with her. Diane, meanwhile, seeks to set the record straight, asserting her innocence after all this time. And since no one is going anywhere in the storm, Maura encourages Diane to share her side of the story, which she'd never had a chance to do in court.

Over the next few hours, the informal court in Sullivan's reviews the facts and theories about the case—and comes to some surprising conclusions. But is it enough to convince the police to take a new look at an old case? A clever spin on the classic locked room mystery, Cruel Winter, the fifth in New York Times bestselling author Sheila Connolly's series, will delight fans of the Emerald Isle. 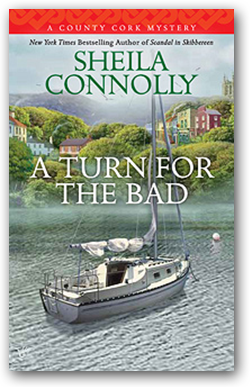 A Turn for the Bad

After calling Ireland home for six months, Boston expat Maura Donovan still has a lot to learn about Irish ways—and Sullivan's Pub is her classroom. Maura didn't only inherit a business, she inherited a tight-knit community. And when a tragedy strikes, it's the talk of the pub. A local farmer, out for a stroll on the beach with his young son, has mysteriously disappeared. Did he drown? Kill himself? The child can say only that he saw a boat.

Everyone from the local gardai to the Coast Guard is scouring the Cork coast, but when a body is finally brought ashore, it's the wrong man. An accidental drowning or something more sinister? Trusting the words of the boy and listening to the suspicions of her employee Mick that the missing farmer might have run afoul of smugglers, Maura decides to investigate the deserted coves and isolated inlets for herself. But this time she may be getting in over her head... 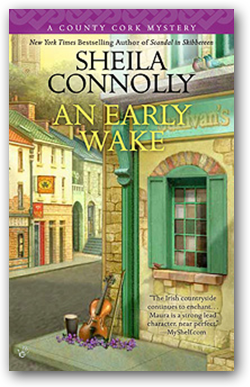 Summer is ending in County Cork, Ireland, and with it the tourist season. Expat Maura Donovan is determined to keep Sullivan's Pub in the black as the days grow shorter—but how? When she hears that the place was once a hot spot for Irish musicians who'd come play in the back room, she wonders if bringing back live music might be Sullivan's salvation.

As word gets out, legendary musicians begin to appear at the pub, and the first impromptu jam session brings in scores of music lovers. But things hit a sour note when Maura finds a dead musician in the back room the next morning. With a slew of potential suspects, it's going to take more than a pint and a good think to force a murderer to face the music. 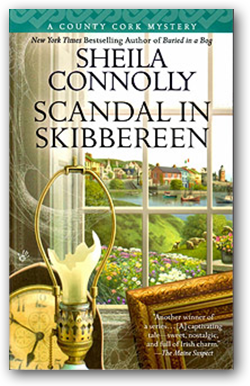 Bostonian Maura is beginning to feel settled in her new Irish home, just in time for summer tourist season to bring fresh business to her pub. But the first traveler to arrive is thirsty for more than just a pint of Guinness. Althea Melville is hot on the trail of a long-lost Van Dyck painting.

Maura agrees to help Althea meet with the residents at the local manor house, the most likely location of the missing art. But when the manor's gardener is found murdered, Maura wonders what Althea's real motives are. Now, to solve the secret of the lost portrait and catch a killer, Maura will have to practice her Irish gift of gab and hunt down some local history—before someone else is out of the picture... 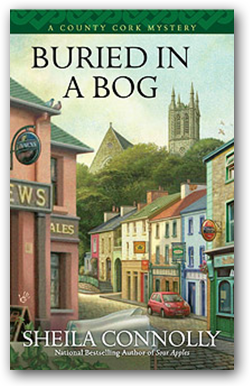 Buried in a Bog

Honoring the wish of her late grandmother, Maura Donovan visits the small Irish village where Gran was born—never expecting to get bogged down in a murder mystery. Nor had she planned to take a job in one of the local pubs, but she finds herself excited to get to know the people who knew her Gran.

In the pub, she's swamped with drink orders as everyone in town gathers to talk about the recent discovery of an almost 100-year-old body in a nearby bog. When Maura realizes she may know something about the dead man—and that the body's connected to another, more recent, death—she fears she's about to become mired in a homicide investigation. Maura has a sinking feeling she may really be getting in over her head...